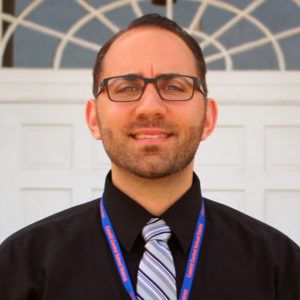 This August, Catskill Central School District welcomed a new assistant principal to our Middle School, Mr. Junait Shah. As an educator, Mr. Shah comes to Catskill from the Stissing Mountain Middle/High School in Pine Plains, where he worked as a Spanish teacher. However, he is already a familiar face to many in our District, as he recently served two years on Catskill’s Board of Education.

As the assistant principal of Catskill Middle School, Shah’s responsibilities include student management and discipline, formal teacher observations, and providing support for curriculum and professional development.

“I’m elated to be here working and serving the community that I live in. I’m looking forward to being present at events and helping to build a greater connection between the community and the school,” Shah said.

Along with NYS certifications as a school building and school district leader, Shah holds a certificate of advanced study in Educational Leadership from Stony Brook University, a master’s degree in English as a Second Language from New York University, and a bachelor’s degree in Adolescent Education/Spanish from SUNY Oneonta. Prior to becoming an administrator, he taught Spanish at the middle and high school levels for the Baldwin Union Free School District, Lansingburgh City School District, and most recently the Pine Plains Central School District. While at Pine Plains, Shah also completed an administrative internship with the district and served on his school’s Building Leadership Team.

Shah lives in Leeds with his wife, who is a teacher at Catskill Elementary School, and their two young children; the couple has a two-year-old daughter and a son entering kindergarten at CES this fall. Along with a love for learning, Shah says he is passionate about food, music, and technology, and that he loves spending his free time with his family and friends. He is also trilingual, being fluent in English, Spanish, and Turkish.

The Catskill Board of Education appointed Shah to the assistant principal position on August 9, 2017. Shah resigned from the Board prior to his appointment, as required by Board policy.

Please be sure to welcome him to CMS when you see him at school this September!