Retired Detective Bill Ryan joined Catskill High School’s Participation in Government and US History classes on March 5 to discuss his first-hand experiences as the Arson and Bombing Investigator for the terrorist attacks on the World Trade Center in 1993 and September 11, 2001. Students in the Participation and Government class recently had a debate about whether the first responders were told told the truth about the air quality being safe at Ground Zero in the aftermath of the 9/11 attack. Mr. Ryan also discussed his current health conditions as well as friends he has lost due to illnesses related to their being at Ground Zero. Mr. Ryan also said that the death toll from 9/11 related diseases have not surpassed the number of lives lost on the actual day of the attack. 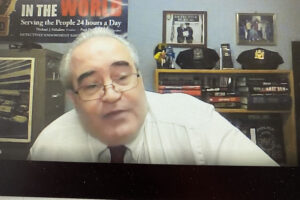